After setting up a “coach selection committee”, task forces and appointing two top managers leading the team for the World Cup in Germany,  another committee with an impressive reputation was established. With a view to avoid complaints from the football stars about uncontrollable balls or sprained ankles, the "lawn expert team" became responsible for the quality of the play grounds in the football stadiums. "The grass in the stadium is like the stage in a theatre," says landscape architect Engelbert Lehnmacher, who created together with his colleague Ernst Rainer this exceptional team in fall 2004.

Dipl.-Ing. Engelbert Lehmacher and Dipl.-Ing. Rainer Ernst, two renowned landscape architects, were nominated "lawn competence team" by the organizing committee to take care of the stadiums and sod producers over a period of two years.

With great precision, the sowing and the laying of the turf in the twelve stadiums of the FIFA 2006 World Cup was planned. About two years before the opening game the organizing committee invited the green keeper of the FIFA World Cup-stadiums to take part in a lawn-workshop in Frankfurt. They agreed to put new lawns in all twelve stadiums immediately after the end of the Bundesliga season 2005/2006.

The concept of cultivating areas was developed in coordination with the OK-2006 FIFA World Cup lawn competence team after a local inspection. (For security reasons,) approximately 240,000 m² (twice the area required) WM lawns were produced. The lawn expert team were responsible for about 530,000 square meters of lawn, including the training grounds in the cities and the hotels where the team stayed because there too the quality of the lawn needed to be perfect. 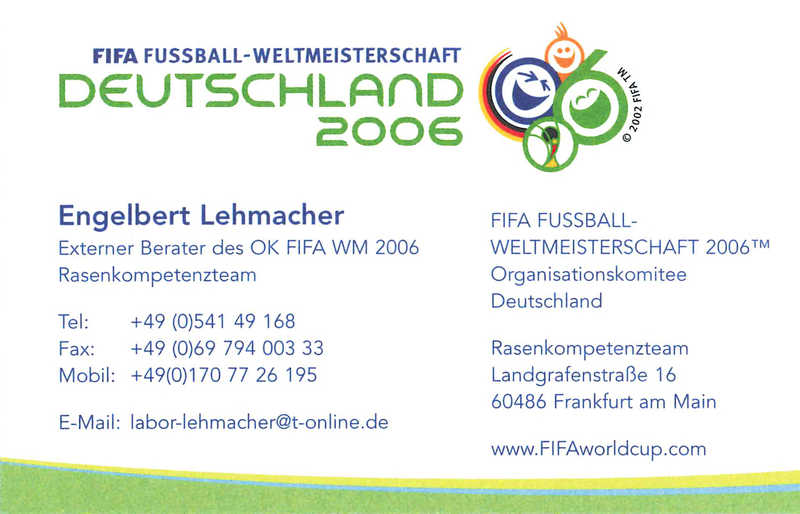